I had to have it. By "it", I mean a card. Recently, I went through my card scans on my computer and deleted off whatever cards I had traded, sold or given away within the past few years. I came across a card that I was fond of years ago when I pulled it but hadn't given it much thought since. It was a Hot Prospects Junior Lessard Red Hot Rookie that was serial #'ed to 100. I hadn't seen that card in ages and figured I had just sold it to someone in one of the big lots I sell to buddies across the map. After proceeding with 743 deletions of card scans, I closed my laptop and that was that.

My wife and I decided to get our carpets cleaned about 2 months ago. The men cleaning the carpets were extremely nice and careful when they moved our couches and certain things out of the way. One of the guys named Pete came by my computer desk where I was working and said, "Hey there, I found this in your couch over there, thought you might want it." I glanced at his hand and there was a crumpled up Hot Prospects Junior Lessard card that I had been wondering where it went. Wow, it sure was beat to crap. I have no idea how it ended up in my couch like that. I thanked Pete, but said it was too far gone to be worth much of anything other than kindling. With that said, it met my garbage can.

That night I had a dream about a Junior Lessard Hot Prospects card, but it was the White version (or the White Hot parallel). The dream took place at a card show, and I haggled with a guy and purchased this card. Weird, I know. The next day, I had to have it. I scoured the internet, and I finally found one on COMC. The price tag on it was a bit more than I wanted to pay, so I went to social media asking any of my followers if they had one for sale or trade. A lot of the social media community pointed me right back in the direction of COMC...darn.

After about a month and my internet searches basically running dry for the card, I figured I would message the owner of the Junior Lessard White Hot Rookie on twitter as we followed each other (I hate doing this, but I was desperate here). He was nice about it and said he would work with me on it. Now I am the proud owner of a 2005/06 Hot Prospects White Hot Junior Lessard Rookie /10. Thanks goes out to Sportcardheaven on COMC for helping me land my "dream card"! Eventually, I would love to dig into Junior Lessard's career and make a blog post about it...hmmm.... future post? Possibly, but for now enjoy this Junior Lessard rare Rookie Card! 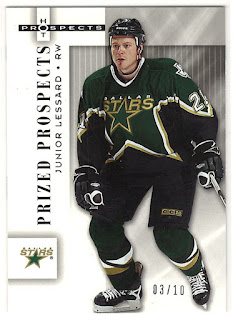 Bryan
I used to write fantasy football and hockey articles, but my real passion is sports cards.